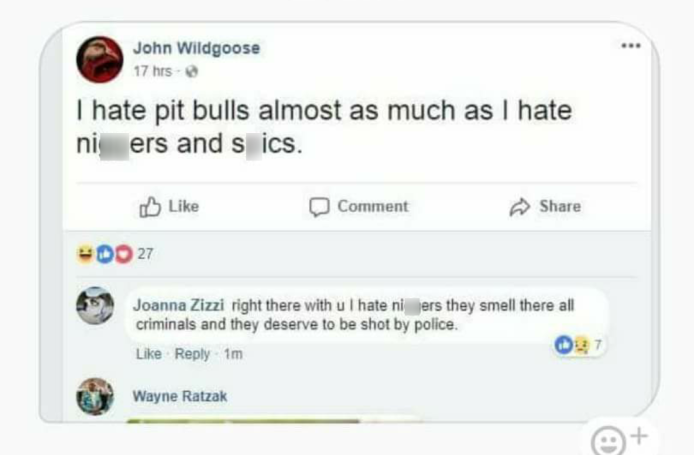 In the five years since my son was brutally mauled to death by family pit bulls, I’ve seen their [pit bull] “advocates” do and say some pretty dishonest, deceiving and despicable things. They get even worse when they get desperate. But I think the new low they hit yesterday has really opened up a Pandora’s box.

I opened up a PM I received to Daxton’s Friends Facebook page that said this:

See, you might not know why they’re [pit bull advocates] currently targeting Mr. Wildgoose, but you would understand if you have been following his Facebook page. Mr. Wildgoose recently raised enough funds from VICTIMS of pit bulls and their advocates to purchase a billboard in Michigan and a billboard truck in Manhattan last weekend.

Of course I thought it was totally awesome, but pit bull advocates weren’t so thrilled.

Before I get back to the original PM screenshot I showed you, I need to rewind it one more day to show you their first feeble attempt at slandering Mr. Wildgoose:

So let’s see. They are so threatened by Mr. Wildgoose, that in under a week, they [pit bull advocates] have accused him of being a pedophile and a racist.

I don’t have a lot of time in my day anymore, so I’ll keep this post short. Back to the original PM to Daxton’s Friends. Unless you’re a pit bull advocate, you’re a pretty smart person. So I’m confident you’ll figure it out. At first I thought some of the super nutters on the internet made a fake Facebook page (click here to see what I’m talking about) to make it look like Mr. Wildgoose was saying such horrific things, but thanks to the quick eye of my friend who pointed it out, their tactic is much worse. One of the pit bull advocates is now using Photoshop to make it look like advocates for public safety are saying things online that they are not. Here is the proof:

I’m going to show you the original post and two screenshots before Joanna removed her comment side by side. It is so obvious what is going on here. Notice the next comment by Joanna followed by Wayne’s.

A warning to pit bull fanatics on the internet:

If these are the tactics that pit bull advocacy are going to start engaging in, you really don’t want to know what kind of ideas you have inspired in me. So far the victims of pit bulls harassment, the comments, false blogs, targeting of our places of employment, flat out lies and slander we receive have not had to be taken out of context or completely made up. I don’t think you want to see how creative my friends and I can be. The possibilities are endless. My advice to you would be to find out whoever made these Photoshop comments and put an end to it.

My response: I wasn’t that far off, was I? 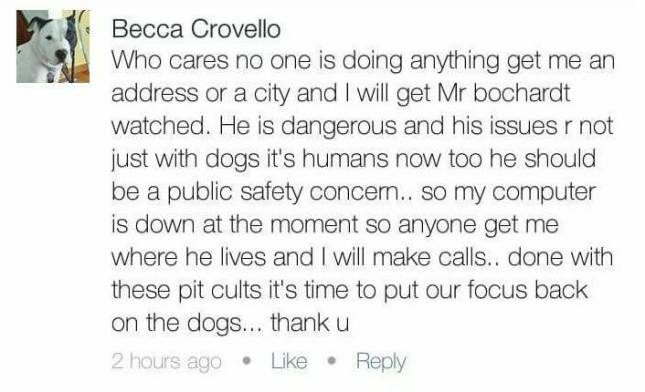 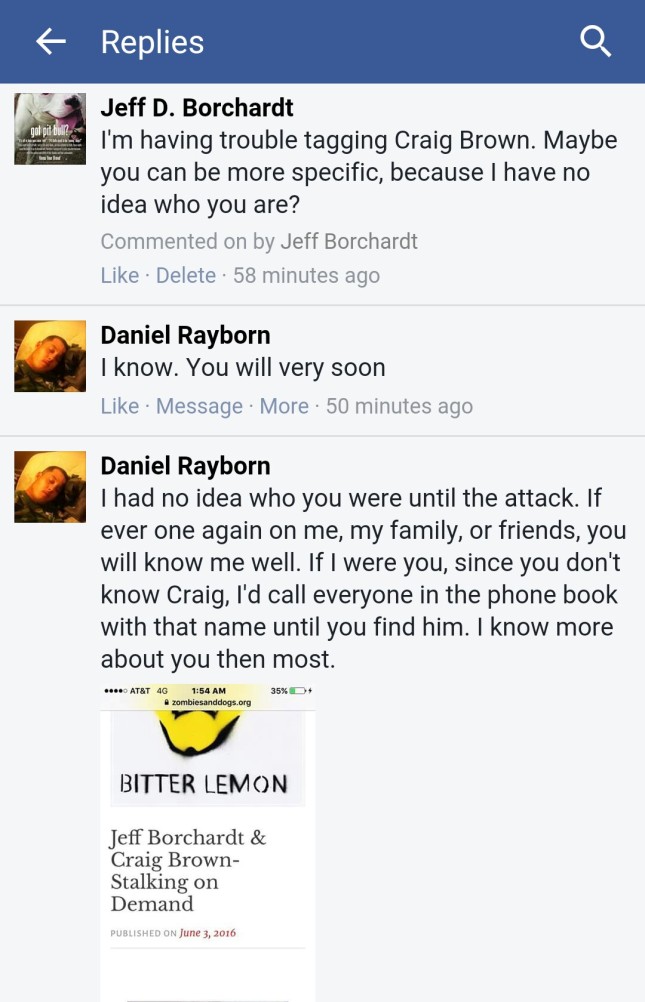 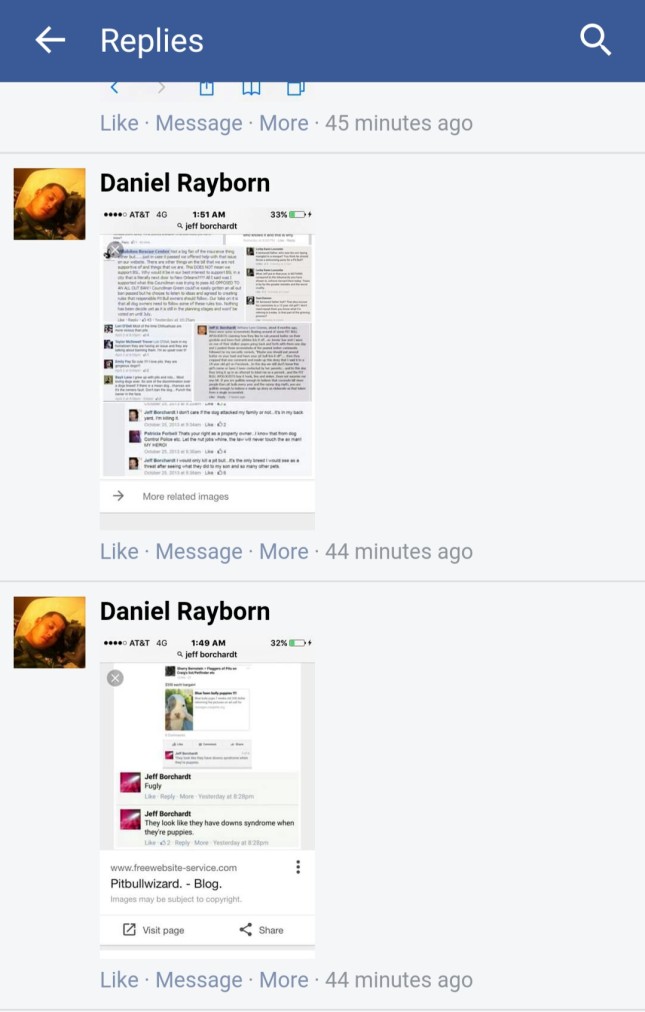 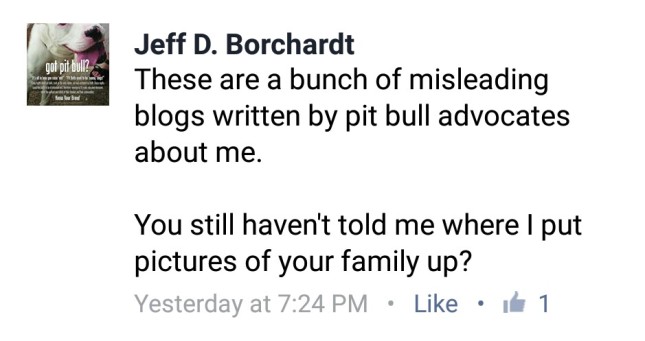 Where ever you go, there you are, Jesus is the way and the only way to the father,Praise Jesus, PIT 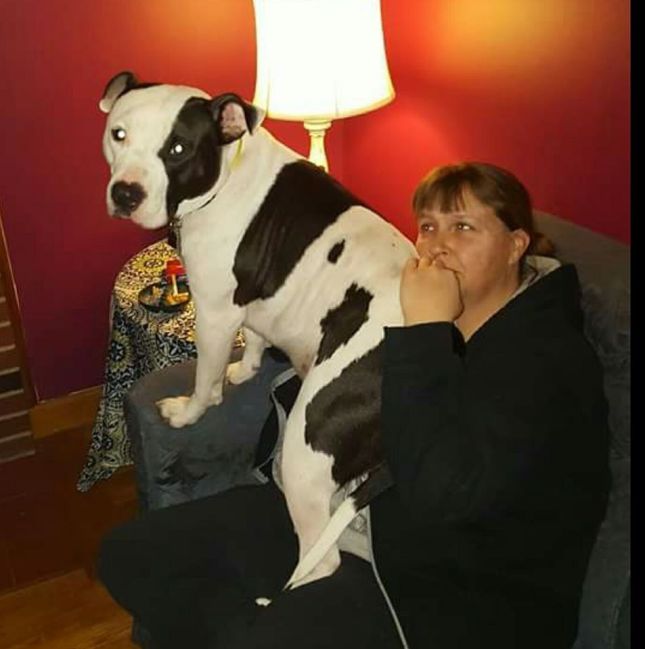 “Hounded, and THE SCREENSHOT”, written by Jeff Borchardt: http://www.daxtonsfriends.com/2014/12/hounded/ 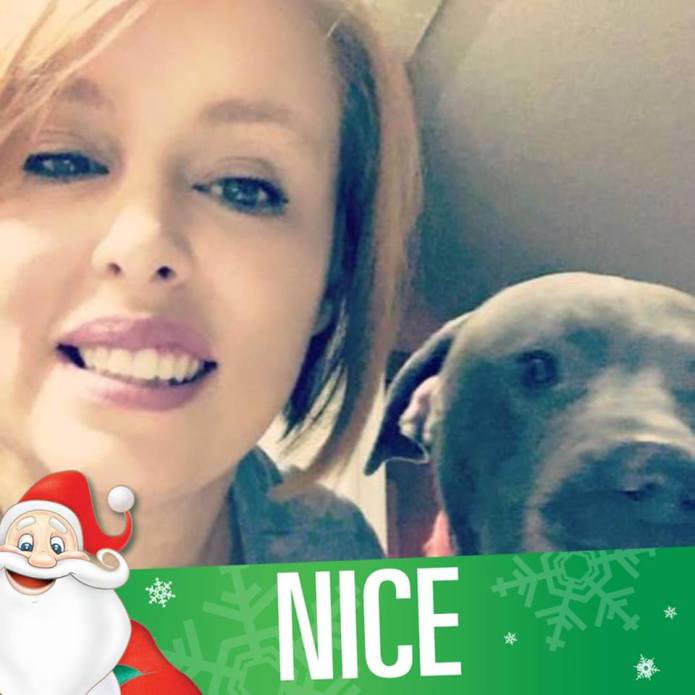 Paula Sully (Redd) Sullivan from Pikeville, North Carolina, Volunteering at Crossposting and Advocating for Animals, all at Pit Bull Activist, Co-Owner at Crazy for Pitties, Advocate at Animal rights activist, stalks, harasses and lies about victims of pit bull attacks and their supporters.

Nothing in the investigation showed any negligence or mistreatment to these dogs prior to the attack and it doesn’t appear that the dogs were provoked in any way.

I read that the babysitter had raised the dogs from puppies and they were loved and adored.  The neighbors said the dogs were friendly and lovable.  There were no charges filed because the owner had done nothing wrong.  I understand this one incident does not condemn every pit bull but but does your organization have any explanation as to what may have occurred in this case?”

“Iwicki stated that the dogs are kenneled at night and were kenneled most of the day TODAY. (We had 6” of snow the night before) She has had them out of their kennels when Daxton has been there in the past with no problems. She stated she was holding Daxton in her arms when she led both dogs out to the back yard fenced in area to pee. She stated both dogs went of and peed. She said when both dogs came back to her, one of the dogs began to pull on her pant leg of her jeans. She said that she began to slap the dog in the muzzle, telling it to stop. She said she was unsure if it was Bosston or Penny. She stated then both dogs began to bite her on her coat, tearing the pocket, causing her cell phone to fall to the ground. She said at that point, Daxton began to cry. She said the dogs then started jumping up on her, biting Daxton as she held and attempted to shield him from the dogs.

“Report of Humane Ofcer Deputy Richard Lagle: Deputy Lagle states that he monitored the situation via portable radio in his office at the Sherif’s Department. He reports that the dogs were described as two 65 lb pit-bull type dogs. He stated that he contacted Cindy Wroebel, who is the Humane Officer at the Lakeland Animal Shelter, and advised her of the situation. Due to the nature of the attack, Deputy Lagle and Ms. Wroebel came to the decision that the dogs must be euthanized. Ms. Wroebel responded to the scene to remove the dogs. The dogs were transported to Elkhorn Vet Clinic, and euthanized by Dr. Jefrey Korosec. He is the one who prepared the dogs for rabies testing, by removing their heads.

Deputy Lagle asked Dr. Korosec “How the dogs looked?” Dr. Korosec stated that both dogs looked healthy and were in “good” shape. On March 7th, Deputy Lagle retrieved the specimens from the Elkhorn Vet Clinic and drove them to the State Lab of Hygiene. The specimens were turned over to Dr. Jim Kazmierczak for testing. Deputy Lagle states in his report: “As the heads were removed from the box, it is my opinion that they were pure bred “pit-bull” dogs.” The dogs heads were tested and repackaged. Neither of them had rabies. Deputy Lagle contacted the Lake Geneva Animal Hospital, Walworth Clinic, where the dogs received their last evaluation in September 2011. At that time, the female weighed 58 lbs, and the male weighed 49 lbs.” 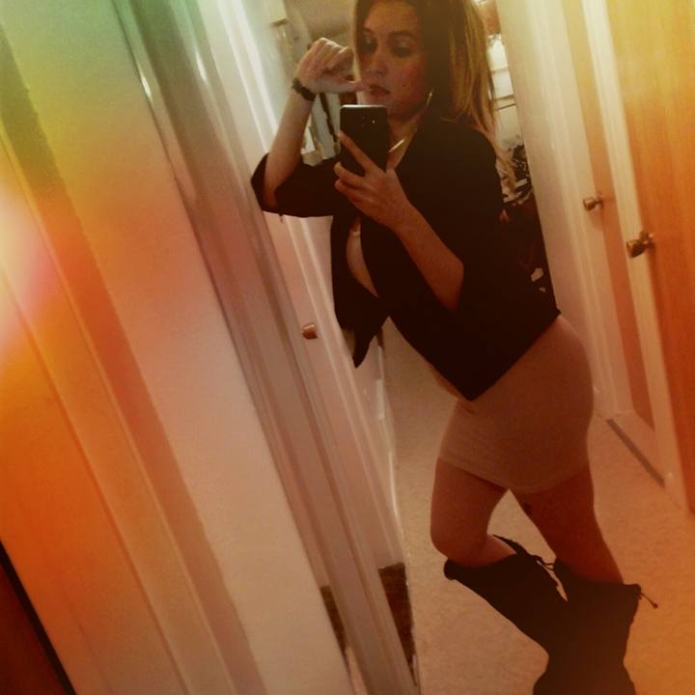 Ashley Elizabeth Schiano Stalks and Harasses the father and family of a child killed by pit bulls. 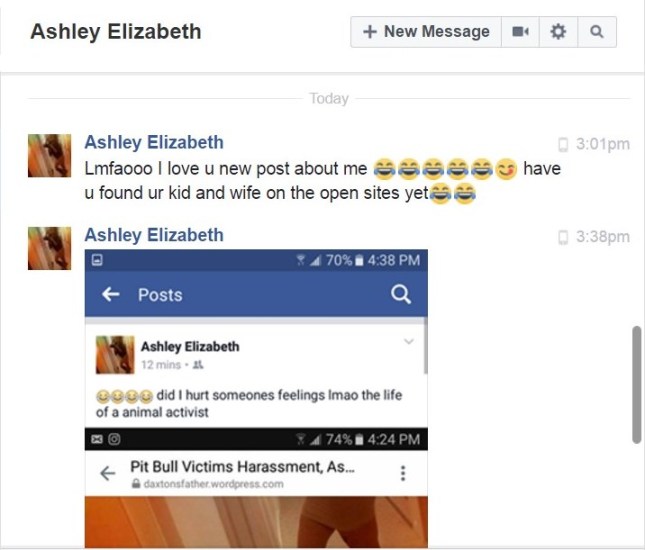 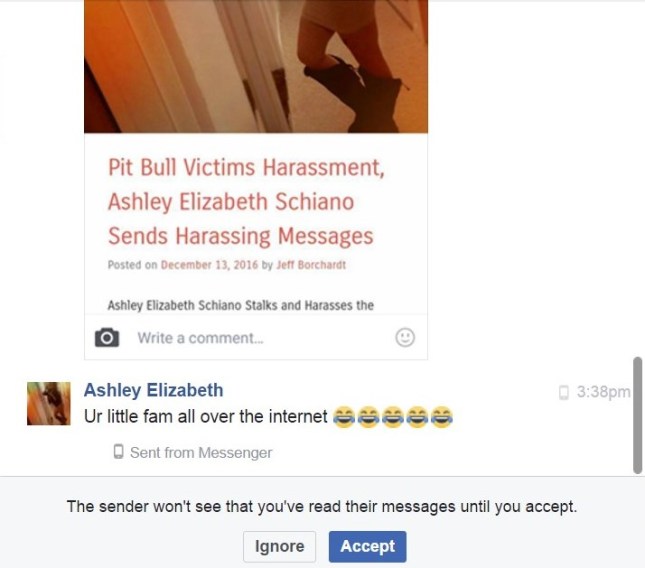 Stop by Ashley’s profile and tell her how you feel about this: https://www.facebook.com/ashley.schiano.7 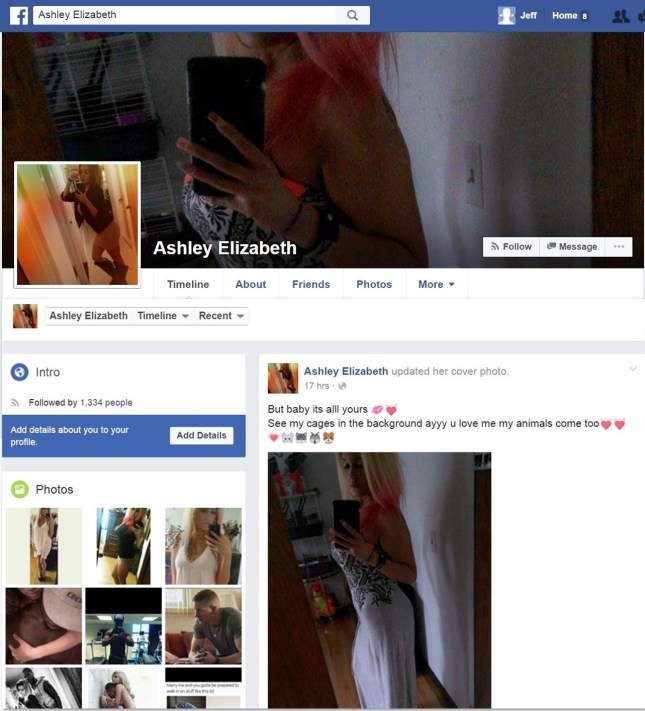 Comments on this post (email and IP addresses included) 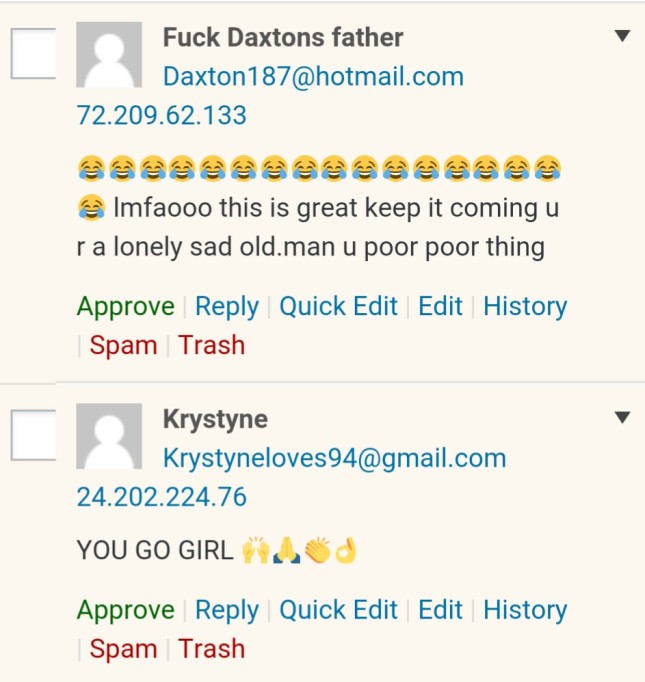 Chad Kollman, Lives in Waupun, Wisconsin, From Mayville, Wisconsin, sends hateful and harassing message to the father of a child killed by pit bulls. 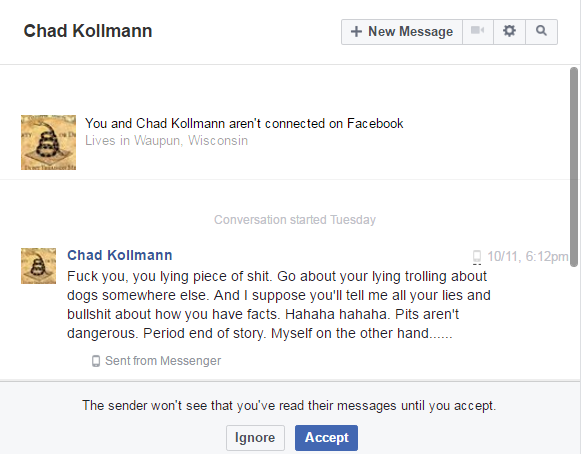 Stop by Chad’s Facebook page and let him know how you feel about this. 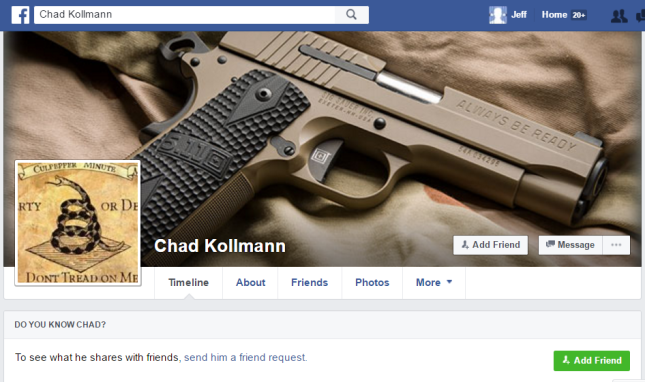 Stop by Leah Delgado’s Facebook page and let her know how you feel about this. 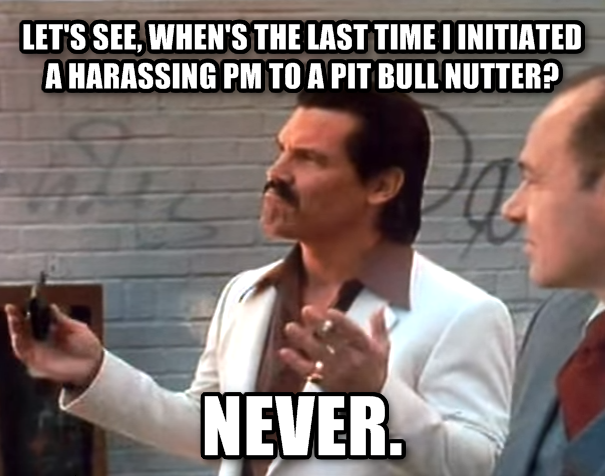 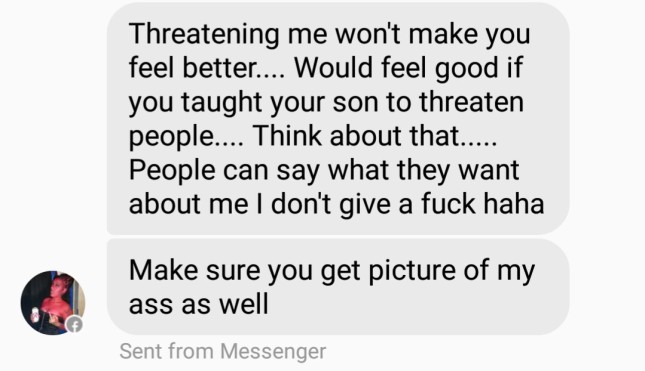 You just read the ENTIRE conversation, folks. Now read her backpedaling and her friends being called in her defense a few weeks later:

I have not attack ANYONE, Angela. YOU came to MY page and sent me a message without knowing or CARING to know what happened to my son. Then you go to your friends, “this Jeff guy is attacking me and not showing the whole story.” YOU. ARE. A. LIAR. 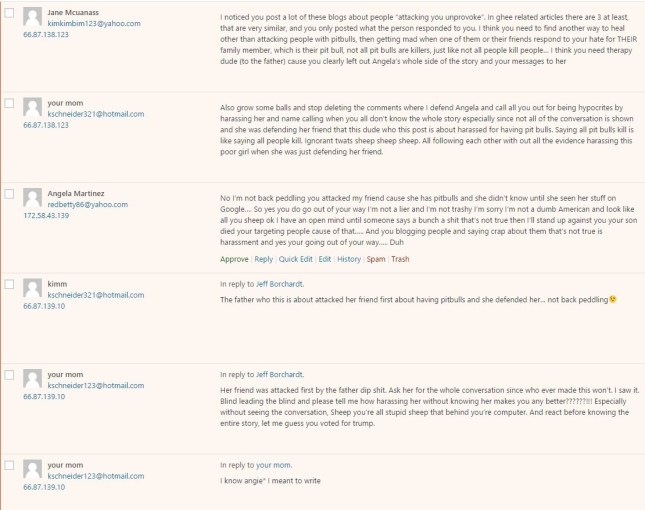 Stop by this lost soul’s Facebook page (have your vomit bags ready) and tell Angie Martinez how you feel about this.